Why Critical Literacy? Because Literacy Is Critical!

Why Critical Literacy?  Because Literacy Is Critical!

When students work collaboratively as peers to form and refine ideas, they’re applying critical literacy.  Whether it’s via social media, in-person, or through writing, they’re operating several levels above the mainstream of think, look, and answer.  When they construct meaningful questions, analyze and question content, apply real-world scenarios to theory and text, they’re reading, writing, thinking and listening through a critical literacy lens. Critical literacy is gaining 21st century momentum, and it has a strong research base that includes the works of Gainer, 2010; Levin, Catlin & Elson, 2010; McDaniel, 2004; Molden, 2007; Morsy, Kieffer & Snow , 2010 among others.

Critical literacy embraces active, hands-on learning by encouraging students to reflect and think deeply about what they read and write through questioning, wondering, researching, and through discussions with peers.  It’s a constant process that doesn’t end in the classroom, and if structured properly will remain an on-going process of deep inquiry, social action, and personal empowerment. Because students assume full responsibility for the entire spectrum of reading, thinking and questioning, learning works into a thinking type that goes through and beyond text. They might think of themselves as characters in literature, text or world event, for example, where they re-purpose these scenes (with our assistance) to come out with an understanding other than what was articulated.

Critical literacy begins at birth, and it’s shaped by prior knowledge, social interaction, and cultural values.  It’s a natural thinking process we use to leverage new knowledge with what we already know in order problem solve and make meaning or sense of what we read.  It’s the pooling of ideas through constant peer interaction that jettisons this process forward.

How do we teach students to think this critically – to question what they read, to think beyond the text, to inquire further about information?  Through media literacy, ever gaining in popularity.

Gainer, J. (2010) in, “Critical Media Literacy in Middle School,” published in the Journal of Adolescent & Adult Literacy, emphasizes that critical literacy is the world of our children, and with proper guidance can teach them to be responsible about the information they take in, and what they do with it.  When students navigate electronic print, whether they’re gaming or surfing, they’re also analyzing relationships, comparing, contrasting, building media, and establishing their own power-base in the process.  This power is transformational, and it’s critical. These are their new literacies, and they’re also our new responsibilities.

Critical literacy operates on the premise that mass media has the power to harness students’ ideologies in ways that influence and empower them in the process.  Mainstream ideology is clear, and largely dependent on the dominant culture (Gainer, 2010, p. 365). When students are taught to read with critical inquiry by reading information with and from multiple points of view, they’re learning to think in ways that analyze versus dictate.  This is critical literacy, and it is critical.

Popular media can help students become producers rather than consumers, or “counter-hegomonic” (Keller & Share, 2007b in: Gainer, 2010).  Here are some suggestions:

As students read, they can re-write their world according to the transformational experience they have when they read it.  This experience often relies upon us, as their teachers/mentors/parents in guiding them there. So how do we guide them there?

In one study students were assigned a video project, where they produced video that didn’t reflect a particular ideology or politics as they might have known them; rather, their video represented their lives in an almost “reality tv” type of format – without power struggles, without dominance or dictation, by teachers, other adults and school officials.  Without even the presence of academics.  Instead, students engaged with one another by goofing around between classes and in the hallways.  There was no judgment about anything, leaving as authentic as possible all to be represented.  It was representational of their perspectives and identities, critically and literally.  The learning process was as much about text and social construction, as it was about taking back power and “co-constructing their own identities through alternative representations” (Gainer, 2010, p. 372).  Students learned as much about active civic engagement as they could to become able-bodied participants in a democratic society (Gainer, 2010).

What are the implications for critical literacies?  Keeping students out of ideology and in a constant “questioning stance” (McDaniel, 2004) insulates them from ideas unduly imposed upon them. We want our students to reconcile logic and good sense, with information as it comes to them. “In general, children in the United States are taught to not question the status quo and to accept and obey the voice of authority” (Mcdaniel, 2004, p. 473). Popular media can have a huge influence in our students’ abilities to start to question, create, empower, and think critically to act responsibly.  Here are some tools we might begin with:
Celly
Celly is a private collaboration and communication tool that facilitates student group work via mobile phone or another handheld device. Teachers are able to join in at any time via text, exchange group messages, polls, reminders and web alerts.
Bubbl.Us
This mind mapping tool allows students to create text bubbles that align and pin together to show connections among ideas.
Lino.It
Students can brainstorm interactively using a sticky board started by the teacher. This makes a wonderful presentation tool as well.
VoiceThread
This is a multimedia presentation tool that uses images, documents, andio and video for student collaboration – all in one place.
Animoto
This digital storytelling tool allows students to create high quality movies using digital pictures, video and music.

Out With The Old and In With The New 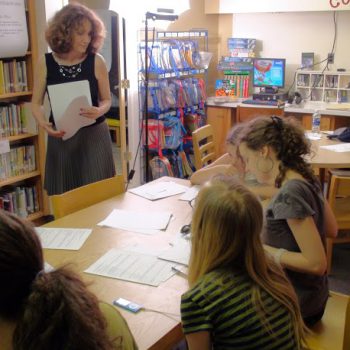 The Role of Questioning in a World of Common Core